My name is Helen and I’m George’s Mum. I wrote this in support of Autism Awareness Week.

My son, George, was diagnosed with severe autism and severe learning difficulties when he was 2 and a half years old.

He also has Sensory Processing Disorder and is non-verbal. We ran a full time home programme with him until he started at a specialist autism primary school when he was 4. He followed a strict diet, we did Biomed and had numerous appointments with paediatricians. He found the world a very confusing and frightening place and was (and still is) a very vulnerable youngster.

The day that I visited Seashell was a game changer.

Finally, an environment where I knew he could truly thrive. The next 3 years was spent trying to convince our local authority to agree to send George there. We were lucky and George moved there in September 2011, aged 11 years. It was a huge change for us all. I don’t think I stopped crying for the first few months! The staff were nothing short of amazing. As well as supporting George through this transition from starting with afternoon visits, then tea time visits, then an overnight stay, they offered us, as parents, care and support. We visited weekly and phoned daily (and this was still the case for George’s entire duration.) There was a home school diary which both teachers and support staff wrote in and I literally devoured this every weekend when I saw him and every time he came home to stay. Any concerns or worries were dealt with quickly and professionally.

George learnt how to express himself and was taught how to use strategies to help him to cope and indeed thrive in a frightening and unpredictable world. He now has a communication device which he uses, ‘George’s voice’. George was given specialist support every step of the way. Staff attended meetings with us and the local authority. They were proactive which as we all know with our children is just the best thing! If George was going through a particularly difficult time, data would be produced to ascertain whether it was down to his immediate environment, hunger, the day of the week and a particular lesson, staff change over etc.

At Seashell, he learnt how to engage with the world around him and he became more independent. He enjoyed landscape gardening, litter picking (he is very tidy!) and has helped out in charity shops, sorting out DVD's and hanging clothes with support. 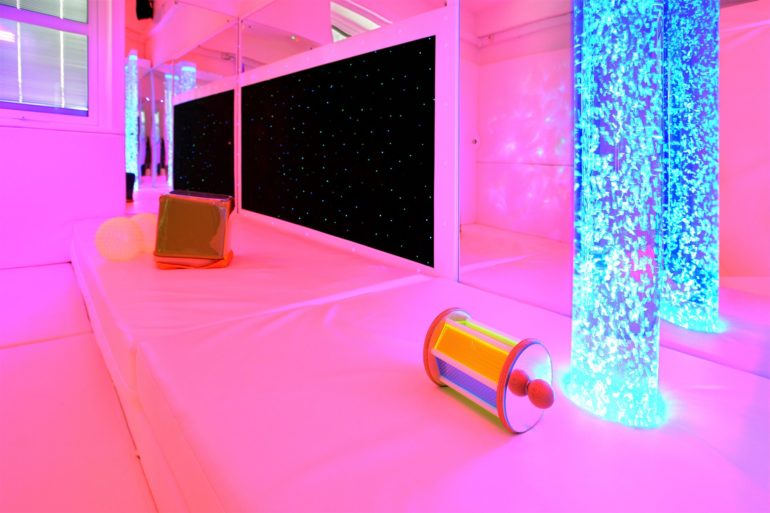 The day that I visited Seashell was a game changer.

He completed his Duke of Edinburgh bronze and silver awards and a myriad of ASDAN qualifications. He learnt to swim and to make choices in what to wear and what to eat. These things, however small, were nothing short of miraculous for us! He especially loved helping to make and serve hot chocolate in garden centres but was rather averse to drinking it himself if staff weren’t quick enough!

The time fast approached when George was due to finish his education at Seashell. The local authority had made it very clear that George would be unable to attend their excellent college and we decided that we’d use the time constructively to find the best care provided by an autism specific body where George could continue to learn and indeed thrive.

George’s last day at school is etched, indelibly in my head. Seeing this 19 year old young man literally bounce down the busy and noisy assembly hall, clutching his special bag given to him by the head teacher, Anne, with a grin on his face that the Cheshire Cat would have been proud of, just gave me the biggest lump in my throat.

How far he had come and this was entirely down to the excellent care and support from every single member of staff who had come across George in his 8 years of education there. It was a massive celebration but tinged with such sadness and fear of the move to come.

George had started transitioning to his new community and vocational activities last summer. He then moved into his new house which he shares with another couple of lads who have autism in November of last year, a week before his 20th birthday. It’s been a massive leap of faith and a rollercoaster of emotions but made all the more easier because of the dedicated care and support from Seashell.

It’s early days but George is getting there. He is beginning to get the measure of his new team and they are, in equal measure beginning to understand him and his unique behaviours and challenges that he faces on a daily basis. He’s attending landscape gardening, attending drama and dance, looking after pigs, litter picking and attends trampolining and disco clubs which he adores. I still ring every day, I don’t think that I’ll ever not be able to! George came home last weekend which was lovely. It felt strange not taking him back to Seashell, it must feel strange to him as well. I look back and feel that he was well and truly blessed for all of those years.

Inspired by this story? Join our team!

Arrange a visit to come and see us soon!

Read
We use cookies on our website to give you the most relevant experience by remembering your preferences and repeat visits. By clicking “Accept”, you consent to the use of ALL the cookies.

This website uses cookies so that we can provide you with the best user experience possible. Cookie information is stored in your browser and performs functions such as recognising you when you return to our website and helping our team to understand which sections of the website you find most interesting and useful.

Strictly Necessary Cookie should be enabled at all times so that we can save your preferences for cookie settings.

If you disable this cookie, we will not be able to save your preferences. This means that every time you visit this website you will need to enable or disable cookies again.