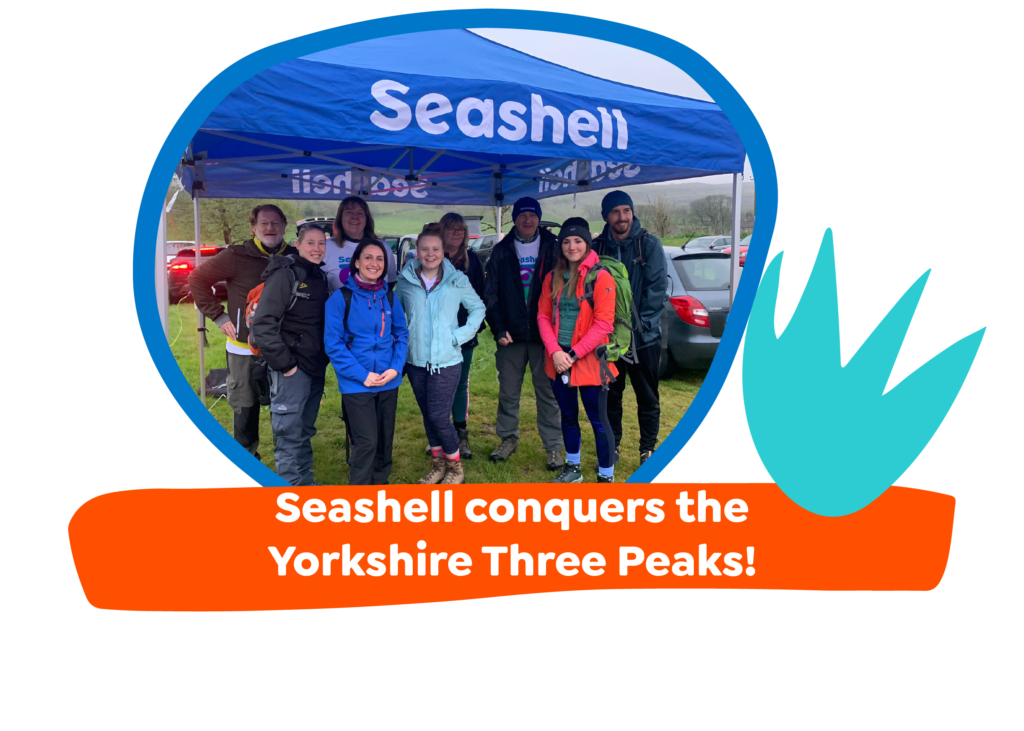 It was 6 am start on quite a warm and dry Friday morning in May. Nearly 90 Seashell supporters gathered at Chapel-le-Dale to receive their safety briefing ready for the day ahead.

By 6.45 am all teams had set off to climb the 723m to reach the first summit of Ingleborough.

Walkers were greeted by the Seashell fundraising team at the first refreshment stop in Horton-in-Ribblesdale to refuel (and pop to the loo!) Lots of smiling faces passed on by, encouraged by their mountain leader to keep moving.

#TeamSeashell set off in good spirits to conquer the 445m climb up the next mountain Pen-y-Ghent. As many reached the summit or were on their descent the weather took a turn for the worst. The temperature dropped, the wind picked up and the rain began to fall.

The next refreshment stop saw everyone reaching into their backpacks to drag out the waterproofs. Plasters were being applied to blisters and a smiley face was replaced with more of a grimace, but still determined. Hopefully the warm cups of tea and coffee being served helped a little?

Only 7 miles to go the now wet and tired but driven group walked over the Ribblehead Viaduct. Up an ascent of 694m and over the third peak Whernside, before completing the long awaited final ‘run in’. We did see some end with a sprint finish.

The smiling faces returned, overjoyed that they had finished their journey covering 25 miles (approximately 65,000 steps) and all under 11 ½ hours!

Steve from Three Peaks Challenges commended the whole team for showing great strength of character to complete the walk in tricky conditions and rapid time. He also commented that in all his 19 years he has never had such a large group of supporters taking on this challenge all from one charity. This success is all down to our supporters!

Mark Ascroft, Director of Finance & Strategy and fellow participant – “Thank you to the individuals and companies who supported this event so fully, the fundraising team at the Trust who organised it so well, and all the guides who kept us all safe and motivated on the mountains (its official they’re not hills!) but most of all, to all of you for your

The challenge in total raised….

Click here to a video of highlights from the day.

Funds raised will help us to provide essential equipment and experiences to the children and young people who we educate and care for at Seashell. We strive to help them learn how to become more independent and live safe, creative and fulfilling lives.

Tales From the Winter Greenhouse

Read
We use cookies on our website to give you the most relevant experience by remembering your preferences and repeat visits. By clicking “Accept”, you consent to the use of ALL the cookies.
Cookie settingsACCEPT
Manage consent

This website uses cookies to improve your experience while you navigate through the website. Out of these, the cookies that are categorized as necessary are stored on your browser as they are essential for the working of basic functionalities of the website. We also use third-party cookies that help us analyze and understand how you use this website. These cookies will be stored in your browser only with your consent. You also have the option to opt-out of these cookies. But opting out of some of these cookies may affect your browsing experience.
Necessary Always Enabled
Necessary cookies are absolutely essential for the website to function properly. This category only includes cookies that ensures basic functionalities and security features of the website. These cookies do not store any personal information.
Non-necessary
Any cookies that may not be particularly necessary for the website to function and is used specifically to collect user personal data via analytics, ads, other embedded contents are termed as non-necessary cookies. It is mandatory to procure user consent prior to running these cookies on your website.
SAVE & ACCEPT